Ninh explains The Rules of Basketball

The object of the game is for your team to score more points than the opposing team. Teams are made up of 15 players, with 5 players on the basketball court at any one time. They consist of two forwards, two guards and a center. The game starts with a tip off. Once someone has won possession of the ball, they have up to 24 seconds to shoot the ball towards the opponent’s basket. These baskets are 10 feet above the ground on a court that’s generally about 94ft long by 50ft wide (in the NBA), and varies depending on where you play.

To move the ball up the court, you can either pass the ball to a teammate … or dribble the ball, where you bounce the ball up and down repeatedly whilst in motion. To score points, a player must shoot the ball into the opponents’ basket. You get two points for any shots scored within this arc. If a player scores from a shot outside this arc, this scores three points.

Any free throws that are awarded to your team scores 1 point. Failure to shoot the ball within 24 seconds results in a shot clock violation, and the other team is awarded possession of the ball. The opposing team will try and take the ball off you by either blocking shots, rebounding a missed shot, or by stealing the ball away from an opposing player so that they can score themselves.

The game is played in 4 x 12 minute quarters in the NBA, 4 x 10 minute quarters Internationally, or 2 x 20 minute halves in NCAA. The highest score at the end of time wins. There are no ties in Basketball, so if the scores are tied at the end of regulation, overtime periods will be played to determine the winner. Wow, that was the shortest video ever! Unfortunately, it doesn’t stop there. Whilst Basketball is an easy game to understand, I’ve just explained the basic concept of the game. There are a lot of things in Basketball that you’re not allowed to do. So to make it easy for you to understand, there are generally two types of things you can’t do: Violations and Fouls. Violations are generally called when you break one of the rules. The main violations include: Shot clock violation – as earlier stated, your team has 24 seconds in which to shoot the ball. If you’ve not shot the ball within this time, a shot-clock violation is called and the ball is awarded to the other team. Double Dribble – In basketball, you are only allowed to dribble the ball and stop once.

If a player then begins to dribble again, this is known as double dribble, and the ball is awarded to the other team. Travelling – If a player takes too many steps without dribbling the ball, this is travelling, and (surprise surprise) the ball is awarded to the other team. Three in the key – A player cannot stay in the key, which is this section of the court, for more than three seconds. Charging – A violation in which an attacking players runs into a stationary defender. Possession of the ball is then awarded to the defending team.

There are other violations that I’ve included a brief description of here, but the ones I previously mentioned are the ones you’re most likely to encounter in the game. 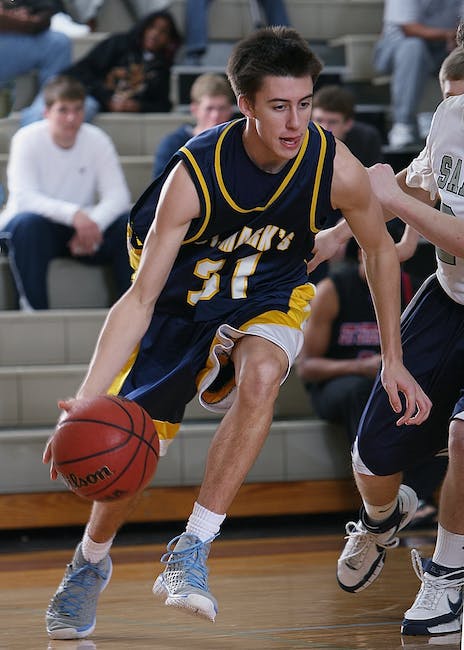 Eight-Second Violation – After a basket, the offensive team has eight seconds to get the ball over midcourt. Palming – A violation in which a player moves his hand under the ball and scoops it while dribbling. Goaltending – When a defensive player interferes illegally with a shot on the rim or on a downward path to the hoop; the shot is assumed in and the offensive team receives the basket. Basket interference – Interfering with the basket rim during a shot. Back-Court Violation – Touching the ball in the backcourt after it has entered the frontcourt and was not last touched by the other team.

FOULS Fouls are the most complicated thing to understand in Basketball, but I’ll try and explain this in the easiest way I know how. Personal Fouls occur when a player commits illegal contact against another player. Imagine two players, an attacking player with the ball, and a defending player without the ball. Now imagine two giant cylinders that surround them that extend from the floor to the ceiling. Neither of those two players is allowed to encroach into each other’s cylindrical space. If an attacking player makes contact with a defender in his space, then it’s called an offensive foul against the attacker. If a defender makes contact with an attacker in his space, then it’s called a defensive foul against the defender. Any foul in the act of shooting results in free throws being awarded to the attacking team.

Two shots for fouls inside the arc and three shots for fouls outside the arc. If the shot went in and the shooter was fouled, the points they scored count and they are awarded one extra shot. Any team that commits 5 or more fouls in any quarter will have free throws awarded against them per subsequent foul, and Any one player who has racked up 5 fouls (internationally) or 6 fouls in the NBA is fouled out – and can no longer participate in the rest of the game.

Flagrant Fouls – Flagrant Fouls are severe fouls that occur when a player has made violent contact against another player. This always results in the other team being awarded two free throws. Technical Fouls – Are fouls that don’t fit the description of either a personal or flagrant foul. Technical fouls can be awarded for fighting, unsportsmanlike conduct, or abuse from players and coaches against referees. Two technical fouls equals an automatic ejection from the game. This is a lot to take in, especially understanding how the fouls work, but as you watch or play basketball, the rules will become clear. If you have found this video at all helpful, please like, share with your friends, rate and comment. If you’re also on Reddit, please post this video and discuss.

It takes me ages to make one of these videos and good karma is always appreciated. Enjoy Basketball! Ninh Ly, www.ninh.co.uk, @NinhLyUK.