Kristian Winfield @Krisplashed
Steve Nash says any instance where Kyrie Irving can be around the team is positive. “I don’t think that anyone’s really been through this before … but now we’re in the position where the pandemic is creating all these new scenarios.” – 5:57 PM

Alex Schiffer @Alex__Schiffer
Asked about having Irving as a part-time player changes with the news of him able to practice, Steve Nash says “My first kind of thought is that it’s positive. We have him around the team for a larger period of our season. We’ll see what it means.” – 5:56 PM

Brian Lewis @NYPost_Lewis
Steve Nash: “The hope is that Kyrie Irving will practice tomorrow, but I can’t confirm that.” #Nets – 5:55 PM

Ohm Youngmisuk @NotoriousOHM
Steve Nash says he hopes Kyrie Irving will be able to practice at the team’s practice outdoors at Brooklyn Bridge Park on Saturday. Nash also says that he is hopeful that Irving will join team on road on Sunday at Philadelphia. – 5:55 PM

Ian Begley @IanBegley
Nets’ coach Steve Nash says ‘the hope is that’ Kyrie Irving will practice with the Nets tomorrow at their annual outdoor practice. Nash says Kevin Durant and James Harden will play tonight vs. MIL. Paul Millsap is out due to health and safety protocols. – 5:54 PM

Kristian Winfield @Krisplashed
“The hope is that Kyrie Irving will practice tomorrow, but I can’t confirm that,” says Steve Nash. – 5:53 PM

Ian Begley @IanBegley
“It’s positive for us,” Steve Nash says when asked about The Athletic’s report that states NYC has deemed the Nets’ practice facility a private facility, which allows Kyrie Irving to practice there. Nash didn’t want to comment in detail until he learned more about the ruling. – 5:52 PM

The Vertical @YahooSportsNBA
Kyrie Irving has been cleared to practice at home after NYC determined the Nets’ practice facility is a private office building, per @Shams Charania. Will still need vaccination to play home games. pic.twitter.com/xTzsaPiGyX – 5:51 PM 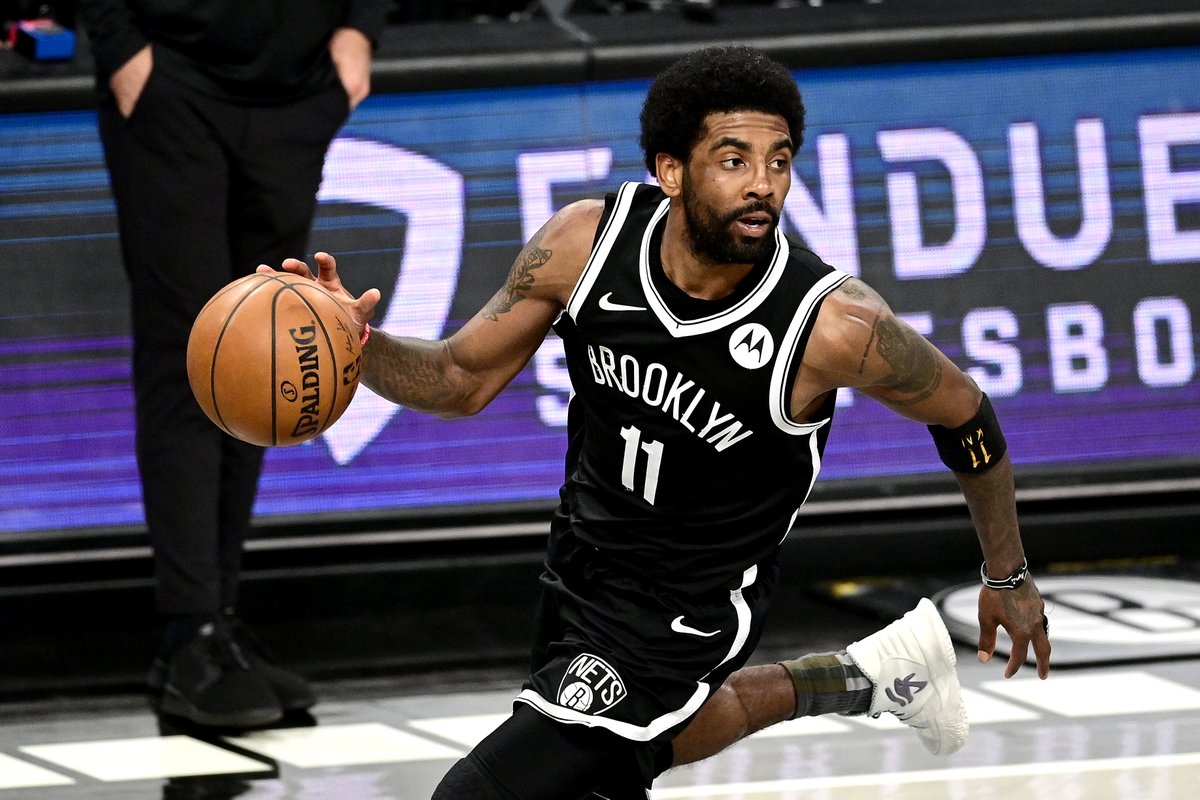 Dan Favale @danfavale
practice facility kyrie is going to be a problem 😤 – 5:50 PM

Alex Schiffer @Alex__Schiffer
Steve Nash declines to give a starting lineup for tonight. Says they may have Kyrie Irving on the road Sunday, but isn’t sure of his status for Monday’s game because he hasn’t been with the team for a week. – 5:50 PM

Kristian Winfield @Krisplashed
Steve Nash says it sounds like the team may have Kyrie Irving on the road with them. – 5:50 PM

David Aldridge @davidaldridgedc
PMers: Kyrie Irving isn’t playing; Ben Simmons still isn’t reporting. What’s possible right now for each? And, are Lillard and Beal locked in to their teams for good? Our @Sam Amick, @John Hollinger & I discuss, in @The Athletic: bit.ly/3iMqGDD – 5:00 PM

Tommy Beer @TommyBeer
Every starter from the 2013 All-Star game that is still active now plays for either Lakers or Nets- expect Chris Paul
And every 2013 All-Star Western Conference reserve (Harden, Aldridge, Westbrook) and every East reserve that logged > 20 mins (Kyrie) also now plays for LA or BK – 3:16 PM

Kamenetzky Brothers @KamBrothers
Friday’s @LockedOnLakers podcast! We preview the Lakers — on the court and from a fantasy B-Ball perspective — and talk Kyrie and Simmons w/@redrock_bball from @LockedOnNBAPods and @lockedonfantasy. #FirstListen
Subscribe. Rate. Enjoy. Thx.
podcasts.apple.com/us/podcast/pre… – 12:20 PM

Chris Mannix @SIChrisMannix
“I feel totally different,” says @James Harden. From the mag, even with Kyrie Irving in limbo, the Nets have enough firepower to win the title — and bring the super team era roaring back. buff.ly/3mBRUOw – 11:32 AM

Barbara Barker @meanbarb
Is he in? Or is he out? Kyrie owes Nets an answer on this Cause a part-time Kyrie Irving isn’t healthy option for this team. My column. newsday.com/sports/columni… – 10:07 AM

David Aldridge @davidaldridgedc
The start of the season is imminent – and Ben Simmons is still holding out, while Kyrie Irving isn’t playing. What happens there, and will Lillard & Beal stay put? Our ⁦@Sam Amick⁩, ⁦@John Hollinger⁩ & I discuss, in ⁦@The Athletic⁩: theathletic.com/2876529/2021/1… – 9:00 AM

Eurohoops @Eurohoopsnet
Kyrie Irving listed as “ineligible to play” vs. Bucks
eurohoops.net/en/nba-news/12… – 6:15 AM

Kamenetzky Brothers @KamBrothers
Friday’s @lockedonlakers pod, early on YouTube. We talk with @redrock_bball (@LockedOnNBAPods, @lockedonfantasy) about the Lakers, Kyrie, Simmons, and where to take LeBron, AD and Russ in your draft. @LockedOnNetwork
Subscribe to the channel!
youtube.com/watch?v=SIXv0e… – 1:46 AM

The Jump @_Talkin_NBA
The fans want to see you play @Kyrie Irving!
#NBATwitter pic.twitter.com/vzFRym03qt – 12:22 AM 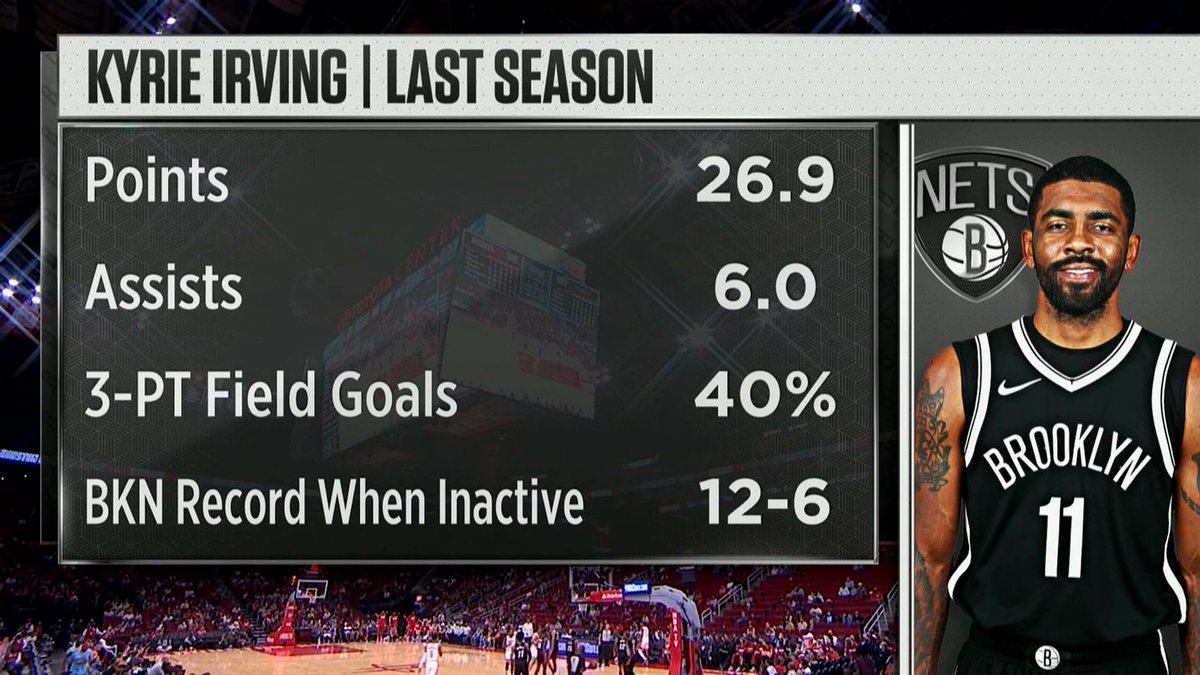 Steve Popper @StevePopper
While there is a lot of rest and load management (and whatever it is Kyrie is doing) going on in preseason, Tom Thibodeau has given hints that he will play to win every night when the season tips off just like last year. pic.twitter.com/ikEd4ocRuA – 8:47 PM 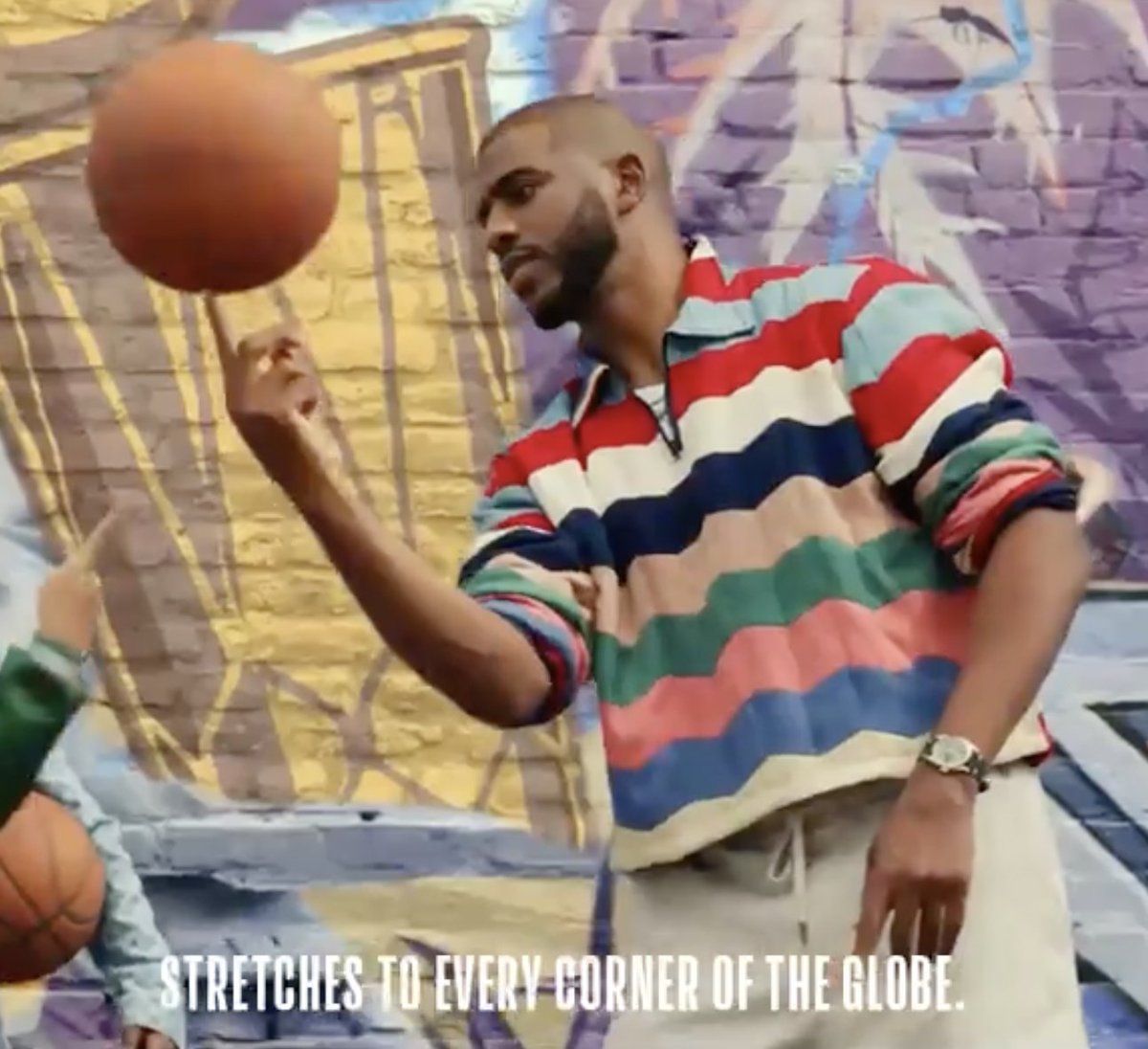 Marc Stein @TheSteinLine
Official status of Kyrie Irving: “Ineligible to play” Friday at home against Milwaukee, Nets say.
My column on where the Nets go from here when Irving can only participate in team activities once (Monday at Philadelphia) between now and opening night: marcstein.substack.com/p/kyrie-wants-… – 6:13 PM

Shams Charania: City Hall official says Irving is cleared to practice at home, but still not able to play in games at Barclays Center until the All-NBA guard fulfills vaccine requirement. -via Twitter @ShamsCharania / October 8, 2021
Brian Lewis: Steve Nash on Irving being able to practice at HSS: “Its positive to be able to welcome him back into the building him and have him be part of the team…It sounds like its positive news.” #Nets #NBA -via Twitter @NYPost_Lewis / October 8, 2021
At this point, the Nets — both management and players — say they want Irving back on the court, but respect his privacy claims. “If he’s not on the court, yeah [it would hurt us]. He’s one of our best players and one of our leaders,” Harden said after practice Thursday. “I want him to be on the team, of course,” Harden told reporters when asked if he hopes Irving would get vaccinated. “He’s been a huge part since I’ve been here, a huge part of our success. The success we did have last year, we were kind of finding a rhythm, that chemistry that we’ve built. I can remember last year that one road trip we had, me and Kyrie. He’s just a special talent that you don’t really see often, so of course I would want him to be on the team. He’s one of the reasons why I came here.” -via NetsDaily / October 8, 2021

Celtics Announce Marcus Smart Is Questionable for Game 1 Against Heat

Giannis Antetokounmpo After Game 7 Loss: ‘Everything Was Heavy’

Chris Paul Won’t Retire After This Season: ‘We’ll Be Right Back Here’

Luka Doncic On Advancing to the Western Conference Finals: ‘Everybody Was Locked In’