Is there any reason to believe Towns wants to leave Minnesota? Krawczynski: Not at the moment, no. Towns is in his seventh season with the Timberwolves. He has said many times that he wants to win in Minnesota and doesn’t want to go elsewhere to do it, including at the end of last season when he said he hoped to have a career like Kobe Bryant or Tim Duncan, two decades with one team. That said, there are those around the league who are watching his situation closely. Towns has had six GMs and five head coaches since he was drafted No. 1 overall in 2015. The Wolves have made the playoffs just once in his time here. If you’re looking for the next star player to want to move, he would be high on a lot of lists. But every chance he has been given to express frustration, including today, he has been adamant that he is on board and wants to be a part of the solution in Minnesota.
Source: The Athletic Staff @ The Athletic 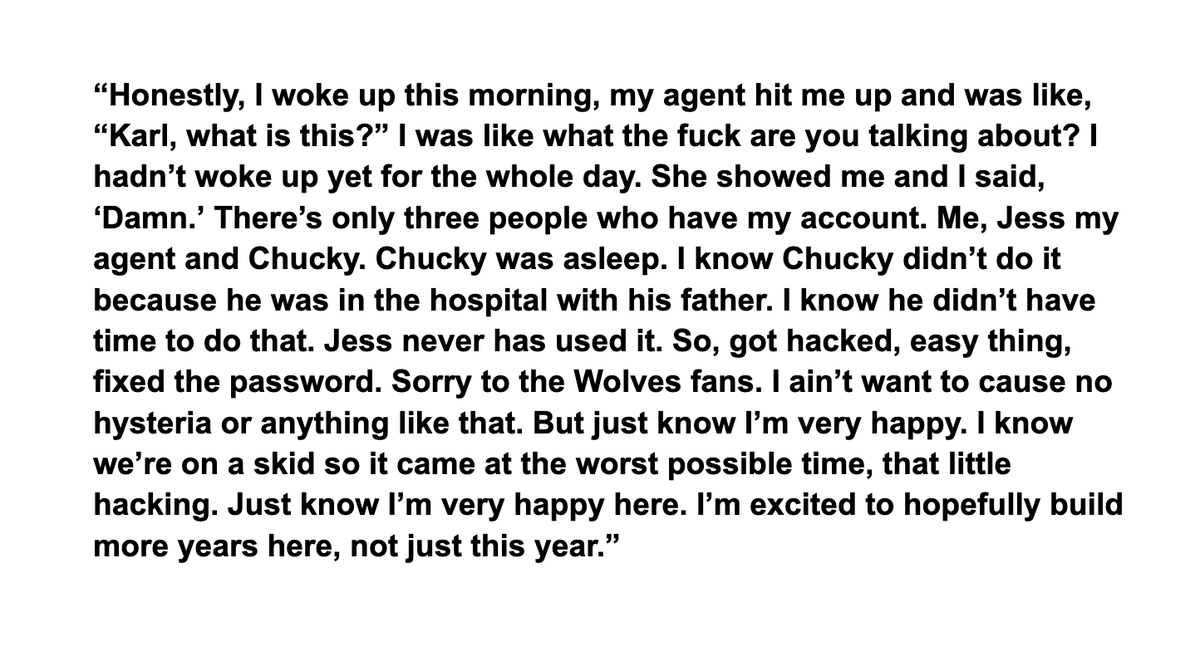 Dane Moore @DaneMooreNBA
Karl-Anthony Towns says only three people have his Twitter password — and that none of them hit the like, so someone hacked him – 3:26 PM

Christopher Hine @ChristopherHine
Karl-Anthony Towns said he was asleep when the #freekat like happened on his twitter feed. Said his agent showed him and they took care of it. – 3:20 PM

Christopher Hine @ChristopherHine
Karl-Anthony Towns: “We’re on a three-game slide right now in the NBA. If I know one thing about slides here in Minnesota, it could go from three to 18 to 19, 20 really quick,” – 11:16 PM

Dane Moore @DaneMooreNBA
Karl-Anthony Towns on the one thing he would want to change from tonight:
“Slumps don’t last forever. The one thing we can control is our defense.” – 10:55 PM

Dane Moore @DaneMooreNBA
There are these bursts of time where Anthony Edwards is clearly the Wolves best player — and Karl-Anthony Towns is having an awesome year – 8:45 PM

Law Murray @LawMurrayTheNU
Jackson off to a hot start with Clippers up 27-23 at the end of the first quarter; he and Karl-Anthony Towns (5 points, 5 rebounds) played entire first quarter.
Non-Jackson Clippers made only 5/15 FGs, 1/8 3s. Both teams with 6 turnovers. Clippers are outrebounding Minnesota too – 8:37 PM

He knew the tweet like was an issue at practice and walked over to the media and addressed it. The skepticism about the “hacking” excuse is certainly understandable, but KAT has never publicly changed his tune on his desire to be in Minnesota with the Timberwolves. -via The Athletic / November 5, 2021
Karl-Anthony Towns: Just changed my password. We solid on here now -via Twitter @KarlTowns / November 4, 2021
Jon Krawczynski: KAT spoke after practice today. Says he has no idea how that “like” happened. Was asleep when it happened. Says he’s very happy in Minnesota and plans on being here a long time -via Twitter @JonKrawczynski / November 4, 2021